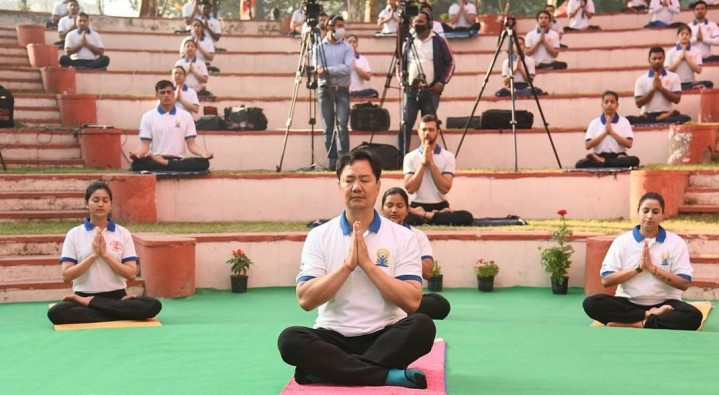 “Yoga is the soft power and has offered India a unique recognition before the international fraternity”, says Union Sports Minister Hiren Rijiju.

At the launch of 100 days to the 7th International Day of Yoga (IDY) at Morarji Desai National Institute of Yoga (MDNIY), the minister said that Yoga is a potential gateway to offer more employment opportunities especially after the Yogasana has been declared as a competitive sport. Rijiju has taken the charge of the Ministry of Ayush since Minister Shripad Yesso Naik is undergoing treatment after an accident.

The Minister appealed to the young students present during the function and also who are watching it online to embrace and practice Yoga Asanas. He also added that due to the untiring efforts of Prime Minister Narendra Modi, Yoga acceptability has enhanced to a great extent that this has become a  'way of life'.  All media people were invited to take part in the live demonstration of Common Yoga Protocol.

The Ministry is a three-day Yoga Mahotsav from April. 9-11 in six cities Itanagar, Ahmadabad, Bhopal, New Delhi, Leh, and Panjim. He added that the Ministry has also lined up varied IT assets to facilitate the IDY observation. It is worth mentioning here that 100 days countdown is a crucial event to observe the International Day of Yoga every year.  It will be a “Mass Movement for Health and Wellbeing” through Yoga in the 100-days run-up to IDY-2021. At a time when the country and the world are focused on recovering from the adverse impact of the pandemic, such type of movement would be really relevant and contribute to the faster recovery of the Pandemic of COVID-19 —lending greater focus to preventive medicine, public health and personal care on physical as well as mental fronts.

CYP (Common Yoga Protocol)- based activity will be inaugurated and its live streaming will be available through different social media platforms of the Ministry and sister organisations. This year will be marked as the 7th edition of International Day of Yoga (IDY) on the 21st of June that was recognized as the IDY by the United Nations General Assembly at the initiative of Hon’ble Prime Minister Narendra Modi in 2014 by a unanimous vote. Every year, our Hon’ble PM himself leads the nation in observation of IDY.